An Exhibition at the Shenzhen Biennale of Architecture and Urbanism 2019, Guangming Science City sub-venue.

Despite its popular stereotype as the car-capital of the world, Los Angeles was once at the forefront of transit-oriented development, boasting the densest rail- transit network of any city in the World in the 1930s. Now, after decades of car- oriented development since World War II, LA is once again becoming a denser and more transit-oriented metropolis. Having already built six new rail- transit lines since 1990, LA county voters approved Measure M in 2016—a sales tax increment that will provide the regional transit authority at least $120 billion for new public transit investments over the next four decades.

While LA is making unprecedented investments into public transport and incentivizing developers to build closer to stations, it is also becoming a hot  battleground for private-sector mobility technologies, such as Uber, Lyft, micro-transit services, as well as plethora of dock-less and docked bikes and e-scooter services. Furthermore, the city’s Department of Transportation is bracing for a looming arrival of automated vehicles (AVs) that are bound to disrupt, and likely challenge the transit-oriented vision of the city. As in many other cities, it has been clear that Uber and Lyft have already contributed to decreased transit ridership in LA. If left to the market alone, even cheaper “robo-taxi” rides in automated vehicles will further increase car-based travel, largely at the expense of public transit ridership and walking, leading to a new wave of motorization that produces more congestion, sprawl and per capita transportation energy consumption.

his exhibit explores an alternative future for LA in 2047—a future, where automated vehicle technology is captured to revolutionize public transit—in particular fixed-route bus service, instead of small passenger vehicles. The exhibit uses a graphic novel as a medium to depict how typical Angeleno families and visitors could experience an automated public transportation system that not only provides a high quality of service, but also overcomes many of the negative externalities of cars, ride-share services and their future automated counterparts. By encouraging AV technology in truly shared buses of various sizes, which complement the rail network of the city, LA would ultimately gain a better built environment—one that wastes significantly less land and energy on transportation, provides better access for all, leads to shorter commute times, creates more encounter between different segments of society, reduces inequality and segregation, and enables Angelenos to be more productive with their time.

By using the medium of a graphic novel, we also critique the field of Urban Design for its almost exclusive focus on place and much less on the experiences of everyday users of the built environment. It is through the eyes of the everyday user that we imagine how the deployment of automation in public bus and shuttle networks of the city could reshape the urban environment, introducing a range of new building types, street layouts, urban forms and land-use patterns, which would collectively maximize multi-modal, socially inclusive, and environmentally sustainable outcomes.

This is a big shift. Is Los Angeles ready? 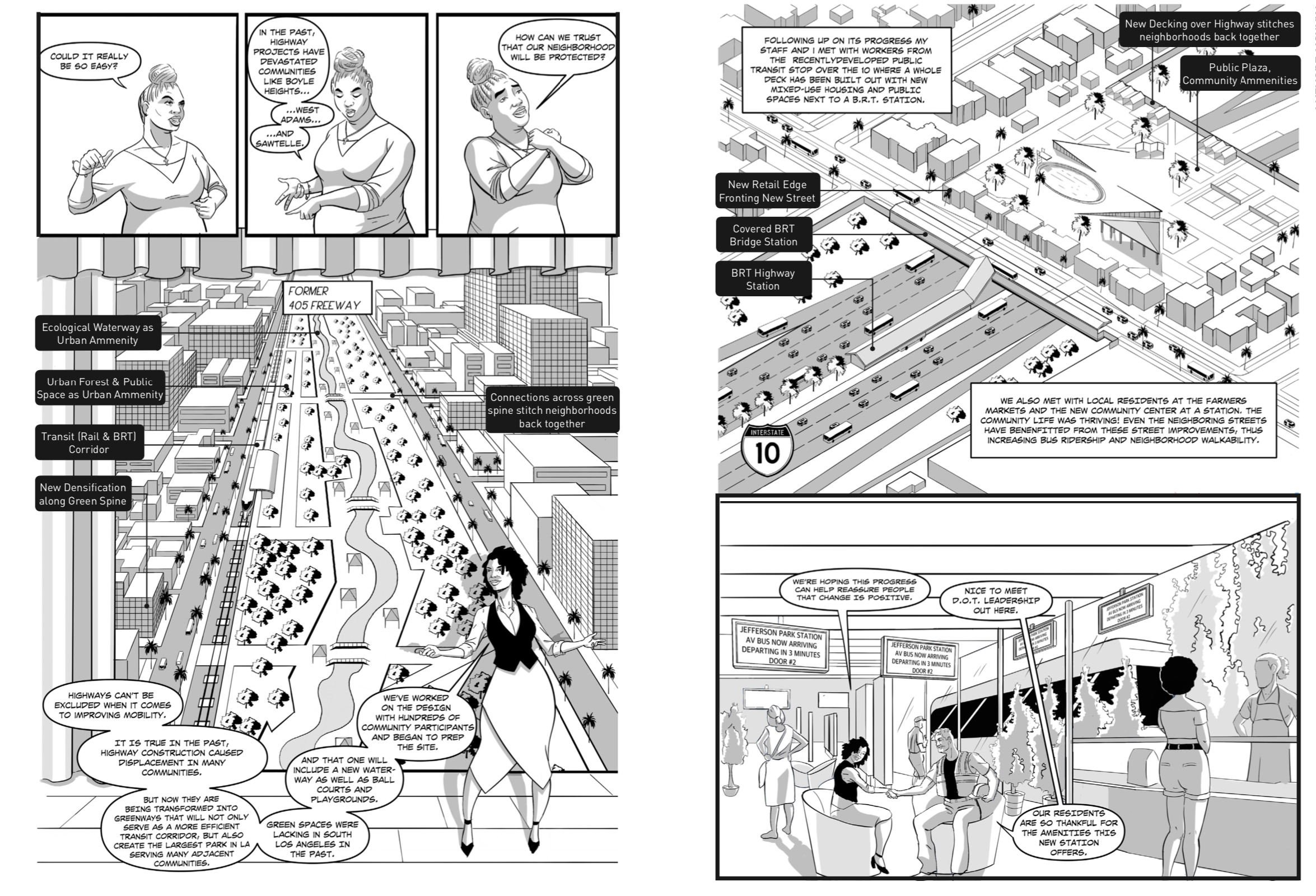